The substantially damaged canvas came to the Gallerie in 1852, where it was immediately placed in storage before being exhibited again in 1877. Only cited by sources in the church of Madonna dell’Orto from the mid-seventeenth century, the work is given in different locations by different authors. The fact that the work was movable has led some scholars to posit that it was a processional banner. The church, in fact, was ceded in 1461 by the Order of the Humiliati to the Canons Regular of San Giorgio in Alga, who were cofounded by Lorenzo Giustiniani, the main figure in the painting. Lorenzo Giustiniani, who was the first patriarch of Venice in 1451, died in 1456, nine years before the canvas was executed, signed and dated by Gentile Bellini in the cartouche in the lower central portion. In the second half of the 1460s, the congregation of Canons Regular mobilised to have him beatified, a process which began in 1471 and only came to an end in 1524. It is therefore probable that the painting was commissioned by the religious order, who wanted to strengthen their campaign for the beatification of their founder by having an appropriately persuasive image. An earlier portrait of the patriarch, in fact, had already been executed by Gentile’s father Jacopo Bellini in about 1456–1457, but Gentile’s painting is designed to cast the character in a context of hieratic timelessness, coupling the figure’s emaciated features, exasperated in Giustiniani’s gaunt face, with an imposing build, almost as if it were a fluted column. In this portrait, Gentile Bellini, who was also famous outside Venice for his portraiture, fuses the profiled effigy typically used in commemorative medals since Imperial Rome with an innovative, full-figure construction, creating an extraordinarily successful model, as can be evinced from the numerous copies of the painting that have survived. The religious figures who accompany Lorenzo Giustiniani and the mountainous background, along with the garland in the upper portion of the painting, however, recall Andrea Mantegna, who was Gentile’s brother-in-law. 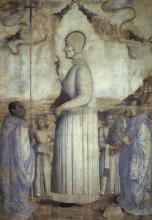 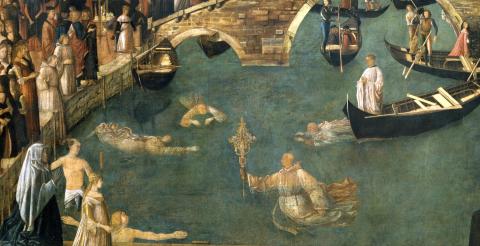 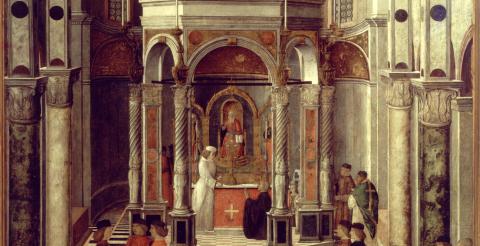 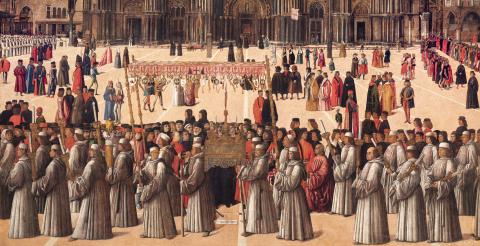