The Hermit Saints Triptych (with Jerome in the centre, Anthony to the left, and Giles to the right) has a similar collector’s history to the Saint Liberata Triptych. It comes from the same Domenico Grimani collection, and was inventoried in Venice as early as the opening of the sixteenth century. The three wood panels may not initially have been intended to be displayed together, and while there is some background continuity between the central and right hand panel, the one to the left showing Saint Anthony seems more “autononous”. The central panel is a masterly piece of work, its spatial depth magnificently flattened into parallel planes. It shows Saint Jerome contemplating the cross in what may once have been a small chapel, as shown by the remaining fragments of flooring and a beautifully decorated altar, where the figures of Judith and Holofernes can be seen. One particularly striking detail is the miniature human figure to the left with clasped hands, an allegory, perhaps, of the human soul ascending towards heaven. The right hand panel shows Saint Giles with an arrow in his heart and accompanied by his loyal hind who, according to legend, fed him with her own milk during his time in retreat. The most curious detail is the figure at the cave window who, according to hagiography, might be Carlo Martello, the man said to have discovered the dying saint and who offered him assistance. Finally, on the left is Saint Anthony Abbot: on one side he is surrounded by his familiar attributes and demons, while on the other a voile curtain draped over a branch reveals two naked girls, an allusion to the temptations the saint famously resisted. 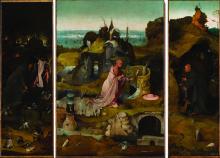 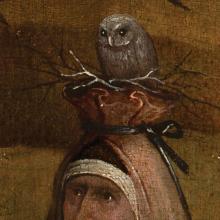 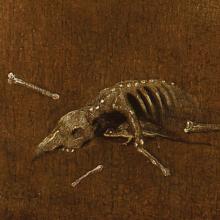 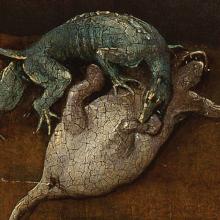 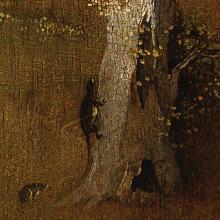