The Assumption of the Virgin

The painting was executed in about 1513, the year Palma Vecchio was paid 50 ducats for this altarpiece.The painting depicts two episodes from the apocryphal Gospels and Jacobus da Varagine’s Golden Legend: the Assumption of the Virgin and the Legend of the Holy Girdle given to Saint Thomas. The Virgin Mary, escorted to heaven by a choir of angels three days after her death, is bending downwards to give Thomas proof of her assumption in the form of a girdle, or belt. The altarpiece dates to Palma Vecchio’s youthful production, yet despite his youth he was already highly regarded by his contemporaries.The style of the painting is characterised by marked sculptural accents, which can clearly be seen in the apostles’ clothes, and are perhaps a homage to Tullio Lombardo.The lacuna, or missing section, at the bottom of the painting was probably due to the addition of a tabernacle at some indeterminate date. Thanks to restoration undertaken in 1993, the painting’s overall state of conservation is generally sound, except for a part of the Virgin’s face. 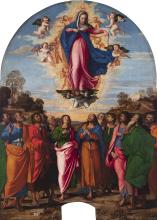 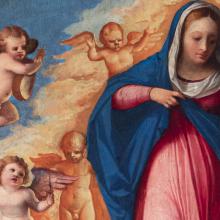 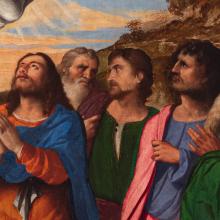 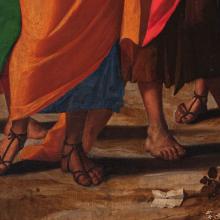 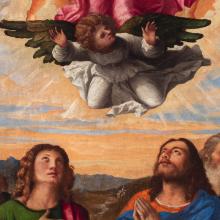