To avoid deterioration the drawing must be conserved in a light- and temperature-controlled environment. For this reason, drawings and prints are not always on permanent display.

The drawing by Raffaello Sanzio (known in English simply as Raphael) is in pen and brown ink with traces of metalpoint. On the recto it shows a warrior on horseback with one arm raised, as he fights off two nude standing figures. At the bottom are the initials “TV”, referring to Timoteo Viti, an artist and contemporary of Raphael who had an important collection of drawings and sketches, many by the Umbrian master himself. The Gallerie dell’Accademia acquired the sketch in 1822 as part of the collection belonging to Giuseppe Bossi, who in turn had purchased the drawing some years previously from Antaldo Antaldi, marquis of Pesaro, heir and descendant of Timoteo Viti.

There are various hypotheses surrounding the subject matter. For example it may be related to The Siege of Perugia in the Louvre and to another drawing in the Albertina Museum in Vienna that is also a study for a siege. The sheet dates back to the early part of the artist’s stay in Florence, either between 1504–1505 or 1505–1506. During this period, Raphael made many studies of nude warriors, working to develop his own personal style on motifs that had previously been dealt with by Michelangelo and Leonardo, who was working at that time on his project for the Battle of Anghiari. Although it is reminiscent of Umbrian compositions, his drawing technique has much more dramatic tension. Here, in fact, Raphael is beginning to group figures together for narrative purposes, and they appear much more life-like. His penwork shows much more maturity after his studies in Urbino where he discovered the work of Pollaiolo and Leonardo. Compared to earlier works, his outlines are much more dynamic and his treatment of the nude much freer.

Due to ongoing restoration work the Cabinet of Prints and Drawings is temporarily closed for consultation until further notice.

Due to ongoing restoration work, the Cabinet of Prints and Drawings is temporarily closed for consultation until further notice. 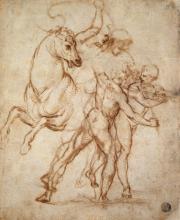 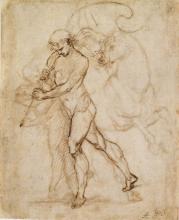 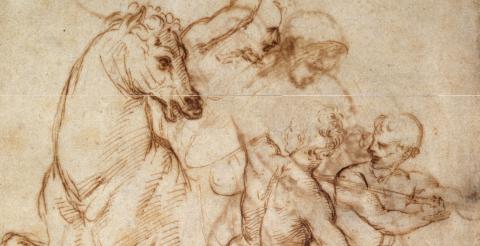