Virgin and Child or Madonna of the Zodiac

The Madonna is an autograph by Cosmè Tura, leading exponent of the fifteenth-century Ferrarese school and, based on stylistic evidence and comparisons with other well-known works of the period, dates from the 1480s. It was made for private devotion and little is known of its provenance until 1896, when it was purchased by the Italian state for the Gallerie. The inscription at the bottom reads “Sviglia el tuo figlio dolce madre pia/ per far infin felice l’alma mia” (Sweet Holy Mother awake your son/so that my soul may finally be at peace) alluding to the reawakening of the Child Jesus and his future resurrection. The bunches of grapes are also a reference to the theme of death and resurrection, in an allusion to Christ’s blood and his Passion, while the two goldfinches symbolise the resurrection. The painting takes its name Madonna of the Zodiac from the signs of the zodiac in gold behind the Virgin, where the signs for Aquarius, Pisces, Sagittarius, and Virgo are still legible on the left. Elements such as these are rather unusual in paintings of the Madonna but reflect the eclectic and cultivated tastes of the court of Ferrara, whose members were particularly interested in astrology. In the lunette, which is from the same period and possibly by the same artist, two angels hold Bernardino of Siena’s coat of arms, which may provide a clue to the painting’s original provenance or at least to the devotional preferences of its donor. 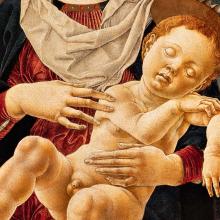 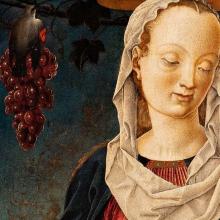