The Visions of the Hereafter, from the collection of cardinal Domenico Grimani (1461–1523), were not taken to Vienna during Austrian rule and stayed in Venice, going from the Palazzo Ducale to the Gallerie dell’Accademia, where they have been permanently housed since 2010. Opinion among scholars is divided as to whether the “visions” were actually part of a much more complex composition, possibly on the theme of the Last Judgment, and that they may have been intended as side panels. The back of the panels has been decorated rather hastily to look like marble, and was probably added later by someone from the artist’s workshop to fit in with new decorative surroundings. The scenes show four distinct “stages”: from Heaven, seen as a lush garden inhabited by the elect few who are free from sin (and thus portrayed naked), to Hell, depicted as a sulphurous swamp inhabited by demons who torture sinners as they desperately try to stay afloat or turn away from the terrifying scene surrounding them. In between, the remaining two panels are arguably configured as intermediate moments of ascent or descent, leading either towards Purgatory, depicted as a tunnel of light where saved souls are accompanied by angels, or a sort of cliff from which souls fall helplessly towards Hell. These visions may have been inspired by texts which were well-known in Flanders and possibly also to Bosch, such as the twelfth-century Vision of Tnugdalus which recounts the odyssey of a knight’s soul, sent by God to Hell, Purgatory, and Heaven, or even Dante’s Divine Comedy, which was translated into Dutch in 1484 in the painter’s hometown of ’s-Hertogenbosch. 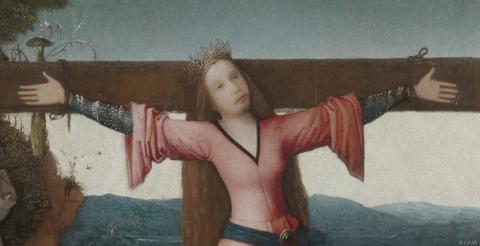